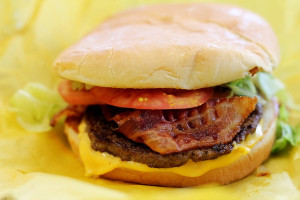 Texas’ beloved restaurant chain Whataburger was recently named No. 1 in the nation by online voters, beating out worthy contenders like In N Out Burger, Smashburger and Steak ’n Shake.

The bracket-style tournament featured eight burger restaurant chains from four U.S. regions (East Coast, West Coast, Midwest and the South), with Whataburger finally coming out on top after defeating In N Out in the “Final Four” and Five Guys in the championship.

While the San Antonio-based Whataburger is arguably a Texas tradition when it comes to a fast casual burger, it’s not just a Texas thing anymore. After expanding into 10 states across the South, people have made headlines waiting for hours at a new location just for a patty melt prepared the Whataburger way with a side of fancy ketchup. But why? There’s more to it than tasty fast food, and the company’s business and branding decisions are worth noting.

The first Whataburger restaurant opened in 1950 in Corpus Christi, selling their namesake specialty Whataburger for a quarter. Nearly 65 years of business and almost 800 locations later, the once-small business is now a family-owned empire. Here are a few top tips for success based upon the burger brand’s continued growth and increasing loyal fan base:

Whataburger maintains both a consistent brand voice and an active role across all of its social media channels, taking the top spot for highest social engagement Nation Restaurant News’ Social 200 list. Its more than 1.6 million Facebook fans, 418,000 Twitter followers and Instagram base that’s approaching 100,000 is proof that the brand’s social marketing efforts haven’t gone unnoticed. By reposting images by fans and writing in everyday vernacular (see below), the company feels in touch with its customer base and approachable, too.

It’s all in the details.

From the trays of tasty condiments carried by “family members” (a Whataburger euphemism for “employees”) to eat-in customers to the classic orange and white color scheme, it’s the little things that make for a memorable experience at a fast casual chain. In N Out Burger, the second place winner of the competition, uses little incentives too, like offering a “secret menu” or the option of going low-carb with iceberg lettuce as a bun replacement.

Slow and steady wins the race.

“True to Whataburger form, however, the move into retail wasn’t rushed. Whataburger prepared for years to understand retail’s sales and innovation cycles and to establish the necessary retail infrastructure,” according to a QSR story in 2013. Today, retail items like Whataburger’s fancy and spicy ketchups are available for purchase at select grocery stores, but their market research took time.

A Whataburger served today is made the same way the first one was in 1950 in Corpus Christi (or as close to it as possible). The restaurant’s all-beef patty claim and small, relatively static menu allows the company to focus more on quality control and strategic business development, rather than gimmicky, limited-time food items and failed franchises. With consistent flavor and friendliness throughout the majority of locations, customers know what to expect whether they’re grabbing a breakfast taquito in the neighborhood or road-tripping through a small Texas town. As long as people keep eating Whataburgers, the Texas chain will keep making them. And with almost 40,000 ways to customize a burger there, it looks like they will.