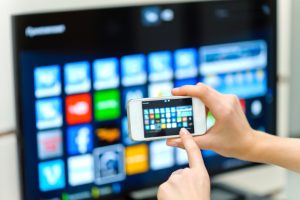 Imagine life without those bulky cable or satellite TV boxes and their yards of endless cable taking up a corner of your living room. By 2022, six of 10 of the country’s households — representing about 204 million people — will have done just that, electing to watch internet-connected TV and its wide array of streaming services instead, according to a recent eMarketer survey.

By the end of this year alone, the number of connected-TV users is projected to top 182 million in the United States.

For advertisers and marketers, the shift from traditional TV, which is chiefly focused on broadcast media, to connected TV, which offer viewers a potpourri of streaming choices, poses challenges on where advertising dollars should go and how those dollars should be targeted in the future.

But first, advertisers and marketers are still trying to get a grasp on the connected-TV landscape.

What Is ‘Connected TV’?

Connected TV is any sort of home-entertainment device, be it any internet-capable TV set such as Apple TV, a video-game console such as Play Station or Xbox, or a Blu-ray disc player, that is connected to the internet.

Through these devices, as well as their smartphones and other mobile devices, users can access such popular video-streaming services as Hulu, Netflix, Pandora and YouTube on the web and search for movies, photos and other digital content, including local-TV and satellite-TV channels. It’s because of this mix that connected TV often is called “smart TV.”

Streaming services particularly are contributing to connected-TV’s booming popularity, and they are expected to enjoy some of the bigger gains in terms of advertising dollars in the next few years.

Connected-TV’s Ad Advantages … and Its Challenges

Marketers already are seeing some advantages to connected-TV advertising, as opposed to traditional TV ad buys.

Those advantages include better ad quality on a connected TV, thanks to HD and stereo sound — pluses that will promote brand loyalty and boost brand exposure, marketers say.

Also advantageous will be ad targeting: When they log into a smart TV, users are asked to use such universal identifiers as Facebook or Google accounts. Marketers can take that third-party data to build user profiles based on such factors as geolocation and online behavior to target ads. Once an ad campaign is targeted and launched, advertisers and marketers can gauge its effectiveness by tracking views, clicks, conversions and responses, via real-time metrics.]

Marketers do face some hurdles with the connected-TV landscape, eMarketer notes.

Barriers include “the question of scale”: Ad-supported, connected-TV platforms don’t have audiences in the tens of millions, as TV advertisers do when they choose the broadcast and cable networks. Though the broadcast networks have suffered double-digit declines in viewing by the 18-to-49 age group, particularly, in recent years, their ad revenues have yet to ail. The annual take for broadcast and cable networks in advanced advertising sales hit $19.7 billion in 2017, which was a 6-percent increase over 2016, according to research firm Media Dynamics.

Another connected-TV drawback, eMarketer notes, is the lack of standardization in the data that platforms collect and share on connected-TV ads. Traditional TV has had its Nielsen ratings for generations, but there’s no such uniform measurement system for audiences in the connected-TV space.

As more Americans cut the cable boxes and cords, better ad targeting and tracking should lead to more profits for companies that are tied to the connected-TV landscape.

The recent ad-revenue advances by the likes of Hulu and Roku point to a favorable future for connected-TV advertising, eMarketer says, and “that potential puts connected TV at the convergence point between TV and video — two of the most successful formats in the history of advertising.”