Home
Blog
Net Neutrality May Be Dead for Now, But Debate Looms

Net Neutrality May Be Dead for Now, But Debate Looms 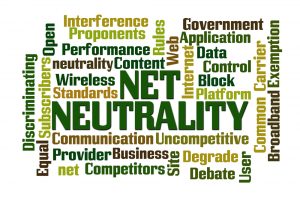 Net neutrality protections that barred internet service providers from blocking or slowing access to content officially died last week when the FCC’s decision this past December to repeal the rules went into effect.

It doesn’t appear that net neutrality will go away as an issue anytime soon, though: It’s expected to remain as a matter of much campaign and legislative debate as the 2018 election year rolls onward.

Several states, including New York and Washington, already have passed rules of their own that prohibit or dissuade internet providers from favoring certain content based on payments from content providers, or charging consumers more for certain content — and California is expected to follow those states soon. The U.S. Senate also passed a bill last month to put the rules back into place, but that effort failed to gain enough backing in the House to move the bill forward.

How Net Neutrality Came to a Close

The net neutrality rules, a result of a 2015 order by former FCC chairman Tom Wheeler, were meant to ensure that all online traffic is treated equally. They prevented internet providers from blocking or throttling traffic via paid fast lanes, and they classified providers as Title II carriers under the revised Telecommunications Act of 1996. That classification thus treated internet providers as a public utility, much like telephone service and electricity are under the act.

The FCC in December repealed the rules by upholding an order by Current FCC Chairman Ajit Pai that reclassifies the internet as a Title I service instead of a common carrier. Pai claims the order will bring a “successful, light-touch regulatory framework” to the internet. He and Republicans who back his ruling say lifting the net neutrality protections will give internet providers incentive to invest more in infrastructure improvements and innovation.

Net neutrality activists beg to differ, though. They say regulators now have no legal basis to block paid prioritization and that carriers are now free to do what they want.

“Without net neutrality, attention goes to the highest bidder rather than those who play by the search engine rules,” says Russell Burnett in a recent post for the Forbes Agency Council, an organization of public relations and media strategy executives.

“When the competition is over money rather than quality, the standard for content and product quality will drop while smaller e-commerce prices skyrocket to compensate for the cost,” he adds. “Marketers would have to cast the widest net through major websites with the most user access rather than providing original contentto customers actively searching for a product.”

Net neutrality activists are hoping the U.S. House might join the Senate by the end of the year in restoring the net neutrality rules as placed in 2015, and they’re urging younger voters and anyone who’s concerned about a free internet to contact their legislators and make net neutrality a major campaign issue.

“Since it began, the internet has been a beautifully functioning model of capitalism,” Burnett concluded in his post for Forbes.

“With an equal opportunity to start and promote a business, customers get the best deal for quality products. It’s in the best interest of users and small businesses to defend net neutrality, especially for those in SEO marketingor other online industries.”