Boost Your Social-Media Posts With These 6 Writing Tips 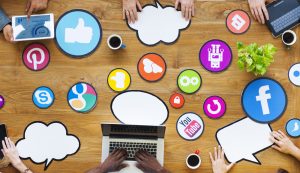 You’ve spent several hours creating and writing a blog post for your site that defines your brand and engages your readers. With that main dish on your marketing menu out of the way, it’s time to enjoy a little dessert: Crafting some fun social-media posts that will attract your audience to that main blog entree you just so carefully prepared.

How do you serve such tempting social-media dessert? You’ll find that readers become more interested and engaged when you capture a certain style in your social-media posts. It’s time to be even more friendly and conversational than you were with that longer, more informational blog post to which you’re linking your readers — and potential customers.

Here are some tips to keep in mind when you’re being more playful with your readers and creating social-media posts:

It has been found that including “you,” “your” and “yours,” and a second-person tone in general, is the most attractive sort of style for companies and their marketers to use when they’re trying to connect with audiences in a personal way.

Keep asking yourself (note that we just used a second-person pronoun, “yourself,” there) whether the text you’re creating for a social-media post will make people want to click on the related link to your blog.

Ever wonder how you can get your readers/customers to talk back to you? Ask them a question directly.

Let’s say you’ve written a blog post about “9 Houseplants You Can Totally Neglect” when it comes to watering, for example. At the end of your social post, you might ask readers, “Have you totally forgotten about a houseplant and then become surprised it survived?” Then add a little call for action, such as “Please tell us other slackers what sort of plant this is.”

Exclamation marks shouldn’t be used at the end of simple statements, but unfortunately, they often are. A wise copyediting professor once told us, “Use exclamation marks only if what you’re saying is something that would be shouted from a mountaintop.”

And, yes, there has been an old “Seinfeld” episode deliciously devoted to this very subject. (Elaine, it seems, was an over-user of exclamation marks!)

Strunk and White, those esteemed masters of style, have this to say: “The exclamation mark is to be reserved for use after true exclamation or commands.” It lists this as a good example of when to use this punctuation mark: “Halt!”

Twitter may now allow 280 characters in its posts instead of 140, but you’ll find that a shorter post with an amusing GIF is more likely to capture your readers’ attention.

Using these common acronyms often found in the world of texting may have seemed a cool way to try to attract millennials in a social-media post a few years ago. But, hey, we’re now trying to reach an audience that includes Generation Z, and they find “LOL” and the like so, well, old-school.

Hashtags and emojis still are effective in social-media posts, but some marketers can get a bit carried away with both of these tools.

Try to keep hashtags, particularly, to what may be more familiar to your audience, say a popular, unbranded tag (#FlashbackFriday) or your location (#LasVegas). It’s OK to precede such hashtags with your brand’s proprietary hashtag, of course, be it #JoesDiner, #AcmeSupply or the like.

With these tips, it’s time to go ahead now and start having some fun writing those social-media posts. Enjoy your dessert.

(Or, as Elaine on “Seinfeld” might yell from her mountaintop: “Enjoy your dessert!”)