What Consumers Want From Brands Online

Kara Williams has been a loyal Cheerios eater as long as she’s eaten solid foods — some 40 years or more. So when she saw the bright yellow logo float by on Facebook in a friend’s news stream she was compelled to post on its wall. “Wow. Cheerios has a Facebook page. I eat them every day. Every. Day. Favorite way to start the day!”

Facebook gets credit for a lot of things, including recently helping foment revolutions in the Middle East. But when it comes to marketing, Facebook can take credit for putting advertisers and consumers together in a place where they not only can talk to each other, but they want to talk to them.

In a new Ad Age/Ipsos Observer survey of digital-media habits, Facebook was a clear winner: 41% of respondents said they want to receive communications from marketers on Facebook — more than double any other digital platform. One in three said it was their “preferred” platform.

But discounting isn’t all the respondents wanted: 42% want better customer service, 28% sought branded games and only 22% care about customer news. The online survey, conducted in mid-February, asked 1,000 U.S. consumers about their digital-media habits. 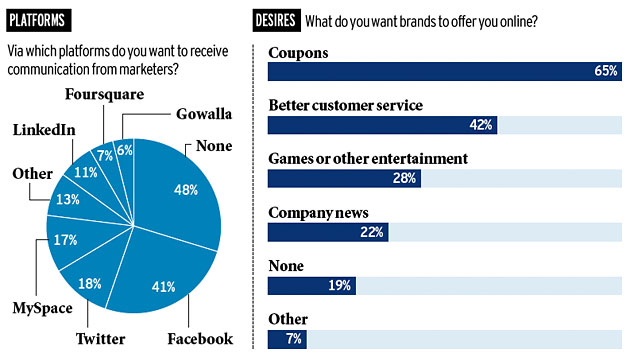 Nearly three-quarters of Facebook users have “liked” at least one brand on the platform and more than a third of users have liked six or more.

Why like a brand? Coupons. Plenty of coupons. “Oh my God, yes,” said Ms. Williams. “If [Cheerios] started offering coupons, heck yeah I’m going to keep them around.”

She isn’t alone: nearly two-thirds of consumers in our survey said they want brands to offer them discounts online. In fact, the first reason they gave for friending a brand was “I hoped to get discounts.” Other reasons included consumers following recommendations from friends: “I looked up the brand on Facebook and liked it,” “I saw an ad for the brand that suggested I go to the fan page,” and “Suggestion from a friend on Facebook.”

Coupons were also the main driver listed for users of location-based check-in services such as Foursquare, Gowalla, Facebook Places and others. Nearly half of those who used those services said that was their main reason for joining. Some 40% said they use the services to keep track of friends or let friends know where they are and 15% are driven by the game-like aspects of earning rewards like Foursquare’s badges.

Even so, these services have a long way to go before they hit the mainstream. In total, 30% of those who don’t use them said it was because none of their friends do. Nearly 20% responded to the question with answers like “Don’t know what it is” and “Never heard of them.”

Not so with Facebook. There are 241 million residents aged 10 and older in the U.S. and 149 million Facebook accounts, which are only open to those 13 and older. When you consider that the latest Pew data shows 79% of adults have internet access, you start getting to a point where saying “Everyone who is online is on Facebook” isn’t that far off.