U.S. small-business owners are substantially more optimistic than they have been in several years. The Wells Fargo/Gallup Small Business Index in January increased to +45, up from +24 in October and the most positive score since the third quarter of 2008. However, optimism is still below the high levels recorded pre-recession. 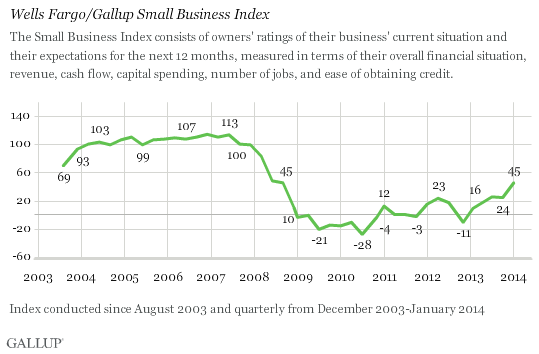 These results are from the most recent update of the Wells Fargo/Gallup Small Business Index, based on telephone interviews with 603 small-business owners conducted Jan. 6-10, 2014.

Small-business owners are modestly more optimistic in terms of their future expectations across most of the six key components that comprise the index, including more positive expectations about hiring in the coming year.

After reaching low points in 2009 and 2010, and again late in 2012, the Wells Fargo/Gallup Small Business Index has generally been on the rise throughout the last five quarters, and is now as high as it has been since mid-2008. Despite this significant improvement, however, this indicator remains substantially below where it was in pre-recession years — as is true with other Gallup economic measures.

A key to improved U.S. job creation in the months to come will be whether small-business owners’ greater optimism translates into actual steps to expand their businesses — including investing more in their businesses and hiring more workers.